I’m excited about Thief, are you? The new iteration is due out February 25th and you can preorder now. 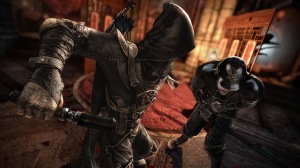 Playing the original Thief was a formative experience for me in those early days before every last thing in the world was cataloged, reviewed, criticized, and turned into pornography on the web. A friend in my college dorm brought it up one day and then gave me the disk saying he was never going to play it again. This wasn’t exactly a ringing endorsement but nevertheless it turned out to be one of the greatest PC games I had ever played. The best first person perspective games leave indelible marks on the memory in the same way real places do. There are vistas in Dark Ages of Camelot that I remember as if I were really there and Quake I maps that still feel like going back to an old neighborhood when I spawn in. Thief, however, stands out among these.

The seventh or eighth mission in Thief: The Dark Project (depending on your build of the game) is the Haunted Cathedral. You must infiltrate a sealed off section of The City that that was walled off after some calamity the details of which are long since forgotten expect from some rumors of zombies and raging fire.  Up to this point all of the missions had been inside The City proper in houses and castles. Now, suddenly it’s this abandoned ruin that seems to be perpetually even darker than the rest of The City.

I know I shouldn’t have been surprised, it’s right there in the damn name, The Haunted Cathedral. And usually I, being of strong analytical mind when it comes to fiction, ain’t afraid of no ghost. But it was after two a.m., I was alone in my room with the lights off, and I was quite focused on sneaking about in this ruin. Up until this point in the game all NPCs had been city watch or citizens, most of which telegraphed their presence by talking to themselves or whistling in the night.

So after about fifteen minutes of tip toeing around this ruin I have run into no one, but there is a terrible muttering floating about that I can’t make out and have decided is part of the ambient sound effects. Finding a hard locked door I set about trying to pick it with the three different types of picks (a mechanic I was happy to see disappear in later games, btw) when the muttering got slightly louder. I left the lock alone and looked around, nothing. I went back to the lock again and the sound became louder yet. This time I quit the lock and as my (Garret’s) view returned to the regular POV my screen was filled with the source of that sound, an Apparition, which was now standing right in front of me looking quite pissed about me dicking around with the lock on what was perhaps his front door a hundred years before.

I screamed. I screamed like my desk and melted and reformed into a dragon.

I ran (in game) as you usually have to do when caught in Thief and hid in what would have been well enough of a hiding place from a member of the City Watch but not for this asshole, no. As I sat in the dark waiting with bow drawn (not yet knowing this would be futile) and trained on the door this bastard walks through the wall to my left and starts Care Bear Staring flying skulls at my face. Finally getting a bit more clever I started pelting him with holy water arrows and took him down.

My heart was racing and I was pumped full of adrenaline in a way that had never happened in a single player game before. If were not already in love with The City, the mechanics, and the storyline of Thief the trauma and thrill of defeating this thing was enough to solidify it as the bar against which future games would be measured.

So yeah. About that preorder…